The Nabucco pipeline (also referred to as the Turkey-Austria gas pipeline) was a proposed – and later abandoned – new natural gas route from Erzurum, East Turkey, to the Baumgarten an der March gas hub (near Vienna), Austria. Between these countries, the pipeline would have gone through Bulgaria, Romania and Hungary, thus making these five transit countries the primary investors and shareholders of the grandiose €7.9B project.[i]

The total length of the pipeline was to be 3,893 kilometres, more than 70% of which would have been laid in Turkey alone.[ii] At its eastern end, it was designed to be joined by two feeder pipelines that would have carried gas to it from Azerbaijan through Georgia (the South Caucasus Pipeline), as well as from Iraq through the southern Caspian basin in Iran. Apart from these two countries, Turkmenistan, Egypt and Kazakhstan were considered as the most likely suppliers in the future.[iii] 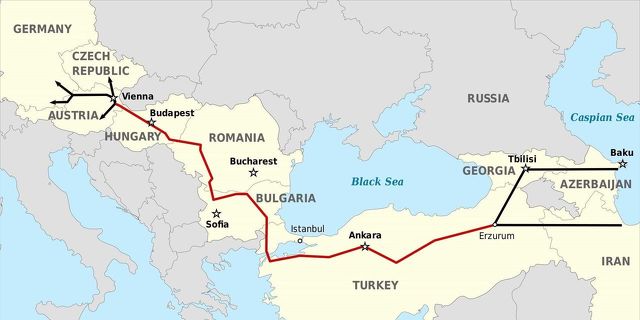