However, there is one thing about the new administration, which is shared by most local experts in the respected countries: Joe Biden is a seasoned diplomat, who served in the Senate’s Foreign Relations Committee, and was the chairman of NATO Observer Group. “Predictability” is the main characteristic expected from Biden. The new administration will improve the relations with the European Union, but continue – and even increase Trump’s tough approach to China and Russia. The Visegrad Group, due to its geographic positions may expect increasing pressure from the US regarding their relations with Moscow and Beijing. Washington may very well ask from its allies to take sides - when it comes to the issues of energy, trade, and technology. At the same time the US will increase its presence in the post-Soviet space, which might provoke Russia, forcing it to take more of an aggressive position.

When Donald Trump came to power in 2016, Russia had high expectations from the Trump administration – the Kremlin was hoping that sanctions introduced after 2014 by his predecessors will be lifted, while the NATO expansion might stop. This has never happened: in the last 4 years alone, the United States imposed 46 sanction packages against Russia.

Though, there will not be a lot of difference in the policy: the American political establishment, Republicans and Democrats alike, considers Russia a threat, therefore in terms of general policy it does not really matter, who is sitting in the White House. Donald Trump in the beginning of his presidency tried to take steps towards normalization with Moscow, but it did not play out well. Trump’s rule in the end was determined by the constant accusations of Russian interference in the 2016 elections, which did not leave him with a lot of maneuvering power. 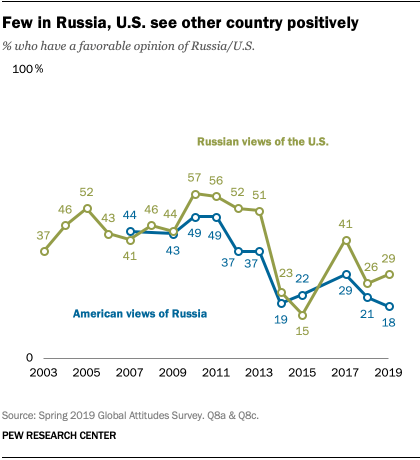 Due to the joint expectations of Trump’s presidency, the positive view of the other country increased in 2017, and fell again in the following years. According to Pew Research Center’s survey, last year only 18% of Americans had a positive view of Russia, while the number was 49% in 2010.

Today, the Kremlin does not have such expectations at all. When the foreign minister, Sergey Lavrov was asked in October, which presidential nominee would be better for Russia, he just shrugged: “United States doesn’t like us”. According to the Russian geopolitical expert, the leader of Carnegie Moscow, Dmitry Trenin, the American-Russian relations are now worse than ever since the beginning of ’80s, but this is still not the bottom yet, and it could be even worse.

In terms of the standards and values represented by the Democrats, this could be the hardest time for Russia, marked by the ongoing political crisis in Belarus (while the Belarusian leader, Alyaksandr Lukashenko is supported by the Kremlin), the poisoning of Alexey Navalny Russian opposition leader (and as a consequence the weakening of Russia’s positions in Europe), the conflict in Transcaucasia, and the lack of progress in Eastern Ukraine.

Probably the biggest difference between Biden and Trump will be their approach: Donald Trump had a very transactional, pragmatic approach to foreign policy. As a businessman, he used his common sense and business sense, acting instinctively. As mentioned before, Biden is more of a professional diplomat, having many years of experience in foreign affairs, while also having experience with Russian relations in the last decades. Due to his age, he knows what the cold war means, and he has visited Russia already in 1979 and 1988, leading American delegations at the negotiation table.

Where Donald Trump have seen American interests and opportunities, Joe Biden sees an aggressive and revanchist Russia, which poses a serious threat to the United States. However, at the same time, this approach is based on confrontation and a dialogue from the position of strength: experiencing the cold war era, Biden will project these practices to his presidency in the future. He has already expressed this position two years ago in an article published on Foreign Affairs. “Even while defending U.S. interests and safeguarding liberal democracy elsewhere, Washington must keep the channels of communication open with Moscow. At the height of the Cold War, American and Soviet leaders recognized that, whatever their differences, they could not afford a miscalculation that might lead to war. They had to keep talking. The same is true today: as two nuclear superpowers with military assets deployed in close proximity in many different parts of the globe, the United States and Russia have a mutual obligation to maintain strategic stability." As he formulated in the same article - “hang tough but keep talking."

(See the full article below.)