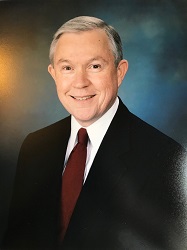 “The Policy Makers Discussion: The U. S. and The Current Crisis"

Jeff Sessions was Attorney General in the Trump administration for the first two years and a U. S. senator for 20 years.  As such he will discuss the emerging challenges to U. S. global leadership, terrorism, ascendant China, and a weakened NATO.  All against the backdrop of Americans and Allies stranded in Afghanistan, while the U. S. Government withdraws with no advance notice to NATO partners. He has been a leading figure in the conservatism movement in the U. S. for over forty years.  Appointed by President Ronald Reagan as a U. S. Attorney in 1981, he is perfectly situated to comment on the events unfolding before our eyes as the Biden administration withdraws from Afghanistan and the Taliban takes control, as the 20th anniversary of 9/11 looms large.

Jeff Sessions served as U.S. Attorney, Attorney General of Alabama, U.S. Senator, and U.S. Attorney General.  During his 20 years in the Senate, he continuously served on the Armed Services and Judiciary Committees and for a time as the senior Republican member of the Budget Committee.  He was an active supporter of a strong national defense, effective crime strategies, and responsible spending. He was a Senate leader in the fight to end illegal immigration, for responsible budgeting, public safety, and became a strong Republican advocate for a pro-American trade agenda and a foreign policy founded on national interest and realism. As a result of these policy convictions,  he became the first Senator to endorse Donald Trump for President and is credited with playing an important role in that campaign.
In January of 2017, President Trump appointed him Attorney General of the United States.  As a result of President Trump’s disagreement with his decision to recuse himself from the so-called Russia investigation, he resigned as Attorney General after the congressional elections in November of 2018.
As Attorney General, he successfully led a national effort that reversed a dangerous surge in violent crime, defended free speech and freedom of religion, strongly supported policies that led to a major reduction in illegal immigration, and helped the President identify and confirm highly talented federal judges.
Throughout his career, he has been recognized as a vigorous advocate for the rule of law and personal integrity.