Refugee crisis: the worst is yet to come

Written by Tamás Orbán, researcher at the Danube Institute, Budapest

In January 2021, Joe Biden was inaugurated as the 46th President of the United States and most countries in the world awaited this moment with a sense of relief. Governments across the globe had a hard time dealing with President Trump’s sometimes hostile, isolationist rhetoric, and they expect Biden to bring about some sort of global peace by returning to multilateralism and a balanced, rule-based foreign policy. It is without doubt that Joe Biden will stabilize the US’ relationships with friends and foes alike, but diplomacy alone will not make the world more peaceful. And if we take a look at the next Secretary of State (SoS), it is almost certain that the Middle East will have to suffer the worst in the coming years.

Europe cheered when Antony Blinken was confirmed to become the SoS under the new Biden administration, and to be honest, the politician does have a natural charm that few people possess. Just like Biden, he is a veteran in US politics and had been shaping the country’s foreign policy ever since Bill Clinton stepped into the White House. Blinken started out as a member of the National Security Council back then, but – quickly rising through the ranks of the State Department – soon became personal advisor to not one but two different presidents and a vice president, and even served as Deputy Secretary of State for two years until President Trump came into power. He is a skilled negotiator, fluent in a number of languages and a proclaimed Europhile, with Central European ancestry as well. Indeed, two of his great-grandparents were Hungarian Jews, who landed on Ellis Island sometime before World War I. Hungarians, therefore, became just as excited about him being the new head of American foreign policy as Western Europeans, however he may turn out to be the one person that no one in Europe would ever wish for after the migrant crisis of 2015.

Blinken had plenty of opportunities to prove he is determined to use just about anything when facing dictators – whether they are real or not, matters less. While President Trump chose customs policy over actual conflicts as the theatre of his wars, the administrations before him tended to exercise their role as the ‘policeman’ of the world, intervening in countless regional conflicts, with more or less catastrophic consequences. And if we recount the post-Cold War history of the American interventionalism, it becomes abundantly clear that Antony Blinken was always a man of war, as his name pops up over and over around the most important decisions.

In 2002, when President Bush asked the Senate’s approval for the invasion of Iraq, then-Senator Joe Biden voted in favour of the war on the advice of Blinken, his foreign policy advisor, who repeatedly pushed Biden towards what he called “tough diplomacy”. As the national security advisor to Vice President Biden, Blinken strongly supported the Libyan intervention against Gaddafi in 2011, even though Biden himself opposed it, thus siding with Obama over his own superior in the question. In 2014, it was Blinken who persuaded the President to support harsher retaliatory measures on behalf of Israel against Gaza, and in 2015, as Deputy Secretary of State, he became one of the loudest proponents of the US intervention in the Yemeni civil war, being among the first officials to suggest the arming of the Saudi coalition against the Iran-backed Houthi rebels. 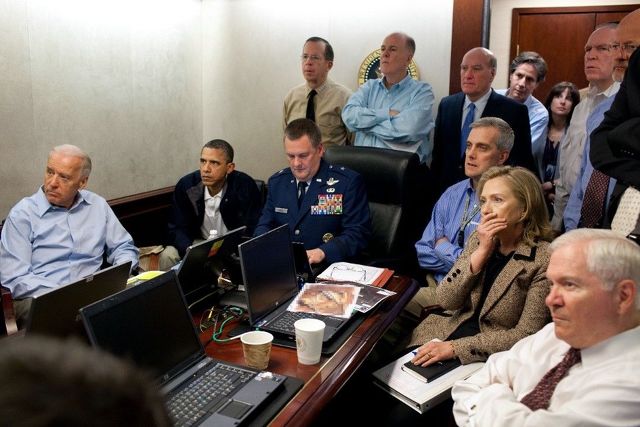 Members of the Obama administration monitoring the operation to eliminate Bin Laden, White House, 2011. Antony Blinken in light-blue shirt in the back (Source: Time Magazine)

However, Blinken’s most important foreign policy achievements were related to the Obama administration’s actions taken in response to the supposed cruelty of the Assad regime. President Obama secretly authorized the arming of different rebel factions as early as 2011, from the beginning of the Syrian civil war, and soon official arms supplies (with a value of $1B annually) started pouring into the country in 2013. From the very beginning, Blinken’s position was that arms alone do not make a difference big enough and the United States has the responsibility to protect Syrians from the oppressive rule of President Assad – with its own forces if necessary. This was the period when Blinken gained fame (and infamy) with his frequently repeated personal motto – illustrating his unique way of thinking – “Superpowers don’t bluff.” It is no surprise, after this, that he played a ‘key role’ in drawing up the details of the 2014 US intervention in Syria, but he always felt that the president should have gone further. Blinken didn’t like, for example, that Obama chose to enter the war only after congressional approval, and later he even criticized him for not sending enough troops into battle.

The consequences of these steps are well-known for everyone. Obama (and his predecessors) left a whole region destabilized, with ongoing wars in Libya, Syria and Yemen, and millions of people without basic necessities preyed upon by terrorists, slavers and human traffickers. The number of people displaced by wars in the world quadrupled under the second term of Obama, which in 2015 created a massive refugee crisis in Europe, sowing political divisions across the continent. Of course, the United States is not solely to blame for this crisis, but its inconsiderate interventions played key roles in the formation of said humanitarian catastrophes. And in that regard Obama outperformed every recent president before him, as the number of fatalities resulting from US wars rose by 496% during his terms, and not only did he bring more combatants into existing conflicts, but started new wars in five different countries as well. In comparison, President Trump decreased the fatality rate by 44%, and could not end his predecessor’s wars, but at least started no others. Unfortunately, Obama returned in January – if not in person, through his former VP and foreign policy staff, his spirit certainly has.

Yet, it is not President Biden of whom the Middle East – and subsequently Europe – has to fear, but the future SoS, Antony Blinken. During his long career, he not only proved that he is prone to making the same mistakes Obama and Biden did, but also that he is more of an interventionist than both of them ever were. What’s more, in 2017 Blinken founded a strategic consulting firm, called WestExec Advisors, packed full of former Democrat national security officials, which not only helps the White House with geopolitical analyses, but also connects the government with certain arms manufacturers after assessing which types of equipment are best for the military. So, in a way, interventionalism has surpassed being just an idea for Blinken – it has become his business.

So it is quite understandable that during the last four years – while not holding any federal position – he demonstrated over and over that his views regarding interventionalism did not change at all by often criticizing the president for abandoning his duties overseas. In an article written in 2019, while admitting that there have been some miscalculations in the past, Blinken advocates for ever stronger military presence in the world, arguing that without US interventions the consequences would be similar to those of the 1930s. “In Syria, we rightly sought to avoid another Iraq by not doing too much, but we made the opposite error of doing too little. Without bringing appropriate power to bear, no peace could be negotiated, much less imposed”, wrote Blinken.

Well, recent history hardly proves this line of thinking. Indeed, the democracies of the world should not let severe violations of human rights go unanswered, nor can America let autocratic superpowers (like China) rise to global hegemony, but the growing number of ‘endless wars’ in the Middle East have not and will not bring peace for the region, only more suffering, poverty and masses displaced.

Europe should prepare while it can, for a new refugee crisis is just over the horizon. If Secretary Blinken will follow the same policies as he did in the past, then we have every reason to expect that the Middle East will be swarming with American drones once again within a year. And then, just like in the case of the coronavirus, Europe will have to bear a way more severe second wave – this time of refugees.