Book Launches: 1. John Sabo and Cardinal Mindszenty, 1957-1971, 2. Do Not Forget This Small Honest Nation, 3. Correspondence of Cardinal József Mindszenty with the Holy See from the American 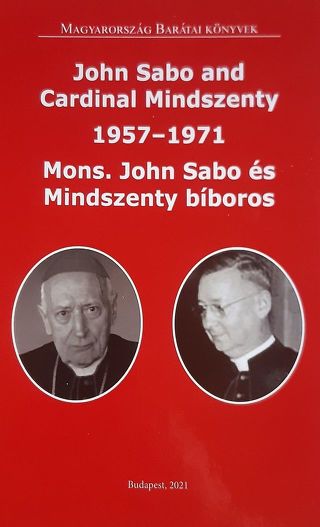 Monsignor John Sabo was an American priest from the Dioceses of Fort Wayne-South Bend, Indiana.  He was a second-generation Hungarian-American and first met the cardinal, known for his fight for social justice, democracy, and the rights of national independence, during the Eucharistic Congress of 1938.  He was one of the few external contacts allowed to the Cardinal during his years of confinement within the U. S. Embassy.  It is fitting that this book launch occurs during the year in which another Eucharistic Congress was again held in Hungary.
The book was the creation of András Miklós Deák and István Zombori and the editor is Fr. Adam (Ádám Somorjai OSB) who will come from Pannonhalma to join us. They will all provide remarks on the book and its significance in the growing list of books concerning Mindszenty. Published by Magyar Egyháztörténeti Enciklopédia Munkaközösség (METEM)and the Friends of Hungary Foundation,  the publishing in hard copy was the contribution of Szilveszter E. Vizi from the Friends of Hungary Foundation. This is Book No. 93 in the series that is edited by Asztrik Várszegi and István Zombori and is the correspondence during the American refuge of His Eminence Venerable Cardinal József Mindszenty and Monsignor John Sabo over 15 years, plus a study by András Miklós Deák on the exceptional nature of the above correspondence. 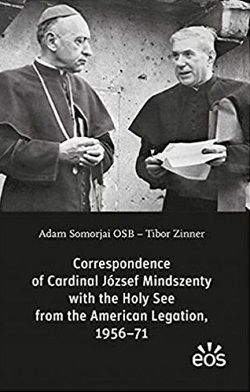 When the door of the American Legation in Szabadság tér closed behind Cardinal Mindszenty at about eight o’clock in the morning on November 4, 1956, nobody knew that he was going to spend 14 years, ten months and twenty-four days within those walls. The volume deals with the correspondence of the Cardinal with the Popes, the Cardinal State Secretary and various other personalities of the Vatican, as well as with other competent foreigners concerning the person of the Archbishop of Esztergom. Between 1956–1963, his relationship with the Vatican was hindered by the fact that the Americans did not forward his letters to the Holy See, so the ones written to Pius XII failed to reach their addressee. He had hardly any relations with Pope John XXIII either, though the situation was gradually improving during the months prior to the pope’s death. At that time Mindszenty was visited first by Archbishop König of Vienna, and then by Agostino Casaroli from the Vatican. During the papacy of Paul VI the correspondence became more intensive and mutual. The Cardinal was allowed to hand over his letters in unsealed envelopes. In Washington the letters were given to the Apostolic Delegate who, in turn, sent them to the Vatican. At first, the Holy See tried to maintain the relations through the good offices of the Italian minister in Budapest, then via the nunciature in Vienna. However, the State Department wished to reserve the right of communication and control, referring to the sensitive nature of the refuge. By presenting the messages in their original form, the authors wish to help the readers see and understand the human being, the aging man who also managed to overcome a serious illness. The man who was forced to leave his homeland for the free world knowing that he was never to see it again. 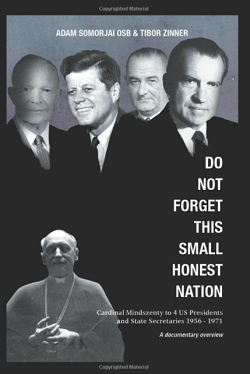 Cardinal Mindszenty for 4 US Presidents and Secretaries of State 1956–1971 as conserved in American Archives and commented on by American diplomats. A documentary overview

This is the English translation of the following book by the same authors: Szeizmográf a Szabadság téren. Mindszenty bíboros levelezése az USA elnökeivel és külügyminisztereivel 1956-1971 (Hamvas Béla Kultúrakutató Intézet, Budapest 2010). The volume offers the historic correspondence of the Cardinal with the presidents, as well as the Secretaries of State of the United States during his refuge at the US Legation, later Embassy. The letters were forwarded to Washington through diplomatic channels. From the original messages the readers of today are given a unique insight into the mind of a hero who spent 5437 days in refuge. However, this is also the story of a kind of monologue. The answers proved to be sporadic: only two Presidents, John Kennedy and Richard Nixon sent a reply to Cardinal Mindszenty. Despite this, we can learn about his unremitting efforts to gain the support of the USA for Hungary and Central–Eastern Europe during the tense years of the Cold War. We can also see how the American “hosts” of this special “guest” viewed his political activities. Not favourably, because they believed that these activities might put his refuge and the security of the mission at risk.