The Czech Republic, Germany and Slovakia are partners in every field of international relations. The economic integrity of the two Central European countries depends largely on the performance of the German economy. In the past, the Beneš Decrees, and nowadays, illegal migration, constitute contentious points in their relationship. Regardless of the identity of the new German chancellor, the strong ties among these nations figure to continue.

The German reunification of 1991 preceded the peaceful dissolution of Czechoslovakia. The chancellor of West Germany, Helmut Kohl, managed to persuade the biggest actors of the world that his nation deserved a chance for a new beginning, and that the united German superstate would be beneficial for the whole international community. Although not every capital was happy about this outcome, world governments, including Washington and Moscow, accepted it. The Berlin Wall and everything it symbolized suddenly became a dark memory of the past. While the Germans celebrated their new birth, the Czechoslovak state reached her end. The split of the two nations, however, did also mean a new beginning for bilateral relations for Prague and Bratislava. In this process, the most important partner for both countries proved to be Germany. 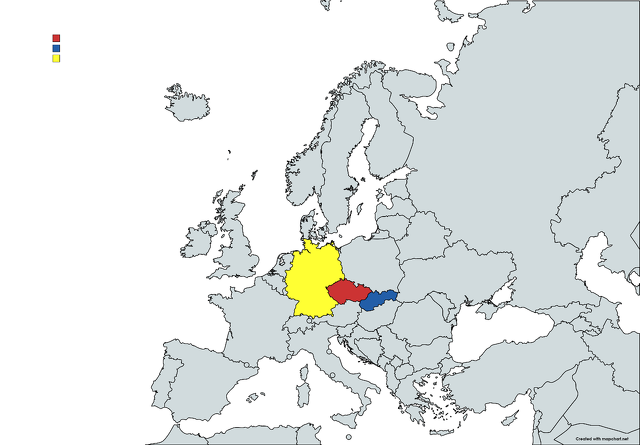 Source: Own editing at “mapchart.net”

One peculiarity of modern democracies is that economic relations often develop faster than political ones. This was the case in the German-Czech and German-Slovak bilateral relations in the dawn of 1993. Immediately after the regime change and political transformation in 1989, successful German industrial firms penetrated Czechoslovakia and stayed after the disintegration of the country. Many of them are listed as the largest local employers to this day. Although the most popular retail companies in both countries (Kaufland and Lidl) are also Germany-based, the phenomenon is most spectacular in the automotive manufacturing industry. The largest and most famous company in the Czech Republic, Škoda Auto a.s., has been a member of the Volkswagen Group since 1991.

[i] Škoda, a company struggling with technological and financial difficulties and often the subject of jokes in the 1980s, is nowadays recognized worldwide as a symbol of smart and professional engineering. The Volkswagen Group was also the first world-renowned carmaker to install a car plant in Slovakia. Its factory in Bratislava is unique even on a worldwide scale, as five of the group’s brands – Volkswagen, Škoda, Audi, Seat and Porsche – are manufactured there.[ii] Critically, in recent years, the automotive industry has become the most important force of the economy of Slovakia. A country covering an area of only of 49,036 square kilometers has become the world’s largest car producer per capita and the 20th largest manufacturer in the world.[iii] Including its plants in both Martin and Stupava, the Volkswagen Group employs thousands of people in the Slovak Republic directly; when one considers suppliers, this reaches a much higher number.