The International Visegrad Fund (IVF) – the only institution within the Visegrad Group – was established in June 2000, at the V4 summit between the prime ministers of Poland, Czechia, Slovakia and Hungary in Prague.[i] The purpose of the Fund – described by the official establishment agreement – was the promotion and development of cultural, scientific and educational cross-border cooperation throughout the V4 countries.[ii]

Initially, the Visegrad Fund had a modest sum of €0.8M in its disposal to be distributed among a few selected projects which involved at least three V4 member states (with organizers from at least two). Even though the fund was designed to be quite cost-effective (spending only 7-8.5% of its budget on administration annually), it quickly became clear that the budget will need to be dramatically increased in order to keep pace with the rising number of applicants each year.[iii]

In 2002, the IVF budget was extended to €2.4M and in addition to the Standard Grants a different type of grant was established in order to fund smaller, localized projects as well (Small Grants Program). Later the Fund established different scholarship programs for post-graduate and doctoral students (extended to six neighbouring countries in late 2004, including Russia, Belarus, Ukraine, Croatia, Romania and Serbia), and in 2005 the organization started the Strategic Program, giving out grants for projects lasting for up to three years.[iv]

The EU accession of the V4 countries in 2004 also gave way for a perspective change in the operation of the IVF. Since then, applicants from all EU member states and the neighbouring countries are able to participate in all programs, if their projects meet the standard criteria (having partner organizations from at least two V4 countries and a subject matter related to the region). Subsequently, the annual budget of the IVF was increased to €3M in 2005.[v]

From then on, the IVF constantly grew in budget and started a number of new grant schemes as well, including the Artist Residency Program, the University Studies Grant and the Strategic Conferences program. The range of countries eligible for application was also extended to include all Western Balkan and Eastern Partnership countries in 2012, with special programs and a budget on their own, with the aim of creating a wider regional cohesion.[vi]

Today’s budget of nearly €10M was fixed in 2014, with €8M coming from the V4 member states in equal contribution, and another €1.5M-2M coming from various non-V4 countries, most prominently the Netherlands, South Korea and Sweden.[vii] 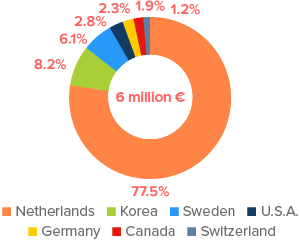 The administration of the International Visegrad Fund consists of three organizational units and has its headquarters in Bratislava. The IVF presidency is rotating yearly among the V4 countries. The supreme decision-making body of the Fund is the Conference of Ministers of Foreign Affairs (CM), which meets at least annually in the country currently holding the presidency. The Conference of Ministers determine the annual contribution, approves the rules of procedure and the final budget.

The Council of Ambassadors (CA) is the body which approves the final list of projects for funding recommended by the Fund. The CA consists of ambassadors of the V4 member states accredited to the country which holds the presidency, and meets at least twice a year. It ensures monitoring, control and evaluation of the Fund’s operations, and drafts up programs and documents for the sessions of the CM.

Finally, the only permanent organizational unit – with a current staff of 13 – is the Secretariat, located in Bratislava, headed by a rotating diplomatic mission with officials elected by the CM for a mandate of three years. The order of rotation varies for the Executive Director and the Deputy Executive Director, the former is accredited in rotation by SK, PL, HU, CZ, while the latter by HU, CZ, SK, PL in the same time.[viii] The current Executive Director is Edit Bátorfi (HU), while her deputy director is Marianna Neupauerová (SK).[ix]